INSIGHTS DO BRASIL: OUR DNA

We have the keys to understanding and explaining the Brazilian consumer to you.

Due to our experience in the country, we are regularly asked to present our point of view.

Below you will find excerpts from an interview we gave to Survey Magazine on the subject.

What are the specificities of the Brazilian market?

Brazil has many specific characteristics. It is a « multifaceted country « . We can recall that Brazil is 8.5 million km2 and has 210 million inhabitants. Brazil is a heavyweight because of its size and the strength of some of its economy.

Brazil is a profusion of colors, of feelings… It is exuberance, beauty… And sometimes, unfortunately, the opposite. It is a country of many contrasts. Despite the recent economic turmoil, Brazil remains, for example, the fourth largest market in the world for the hygiene-beauty sector, and it ranks second for several product categories such as deodorants, perfumes, men’s products, and sun protection. It is in third place for oral hygiene, children’s products, hair products, etc. The average growth has been 4% over the last ten years. And the annual increase in organic products consumption is about 20% to 30%.

Brazil is particularly a pleasant market to study because of its diversity and richness. For example, in cosmetics, thanks to miscegenation, we have all types of skin, even Asian. 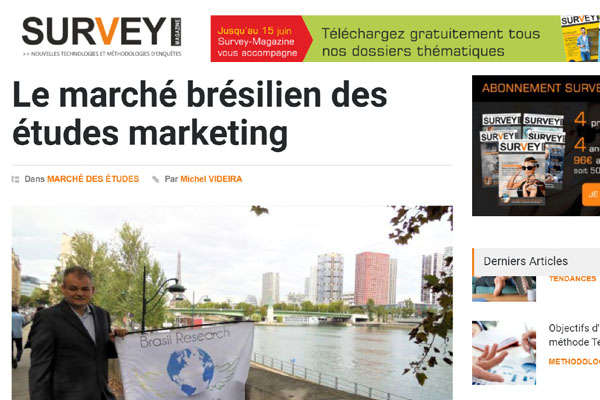 Of course, there are huge differences between the North and the South. Note that 80% of the Brazilian GDP is produced south of Rio de Janeiro. Some cities in the South, such as Curitiba and Florianópolis, are particularly close to Europe in terms of culture. Historically, these cities have received large flows of European migrants: Portuguese, of course, but also Italians, Germans, Poles, Ukrainians, Dutch, etc. For our clients’ study projects, these are specific characteristics to be taken into account. Of course, there are other elements we must take into account. If we want to conduct studies for fans, it may be wise to carry them out in Recife, where it is hot all year round. If one wants to evaluate new concepts of coffee capsules, let’s say that a city like Porto Alegre is more interesting because it is more representative of the profile of consumers of this type of product.

Can you tell us other characteristics of this market?

One of the other characteristics of Brazilians is that they are social networking enthusiasts. The arrival of WhatsApp has changed the way Brazilians communicate and is now an effective tool for us as a research institute to gather information. Previously, communication costs in Brazil were very high, especially at the regional level. When you live in Brazil, you frequently face surprising situations. For example, there are long queues in the « Casas lotéricas » to pay bills when the due date arrives, but the banking applications and payment methods are particularly modern and innovative.

Sometimes, it is a brutal encounter between « old » habits and attitudes and new technologies. It’s also about advanced and modern operating protocols confronted with infrastructures that – sometimes – do not keep up.

That is partly due to the intense and rapid economic boom that took place between 2005 and 2013. GDP growth was achieved thanks to a particular boost in domestic demand, made possible mainly by policies to reduce inequality.

Millions of Brazilians with the least resources have emerged from poverty. Improvements in education and employment have also played a crucial role in this process. Once in the middle class, people change their eating and dressing habits and acquire new goods, such as household appliances, computers, and cars.

The Getúlio Vargas Foundation (FGV Brasil) reports that approximately 39.5 million Brazilians have climbed out of poverty and joined the middle class. The years 2010 and 2011 alone were particularly exceptional: 10 million people joined the C class. That was a particularly euphoric period while Europe was facing the financial turmoil of the subprime crisis.

Brazilians are considered one of the most friendly people in the world. They are sociable and curious. The Brazilian culture was born on ethnic exchanges, on its African and European origins. Their feeling of belonging to the same nation unites them and has allowed the creation of a Brazilian identity that transcends these differences. That is what allowed the samba, the Carnival, and their passion for life to develop. Some consider it a national holiday that acts as a catharsis for the country and helps people release the tensions of everyday life through celebration.